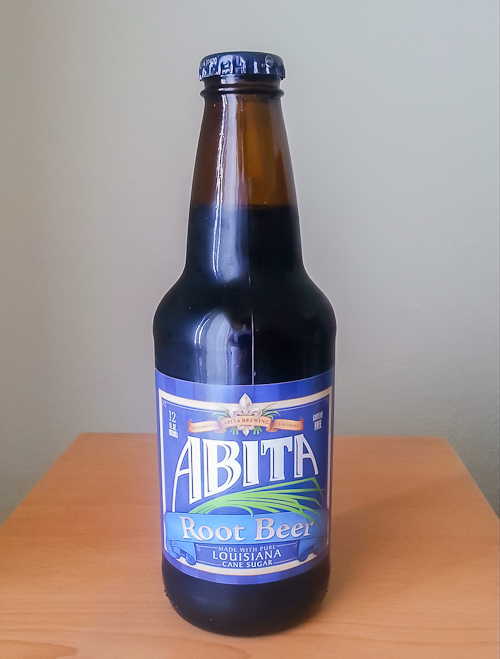 Abita Root Beer comes from the Abita Brewing Company located 30 miles north of New Orleans. It's a relatively recent company, being founded in 1986. Their main focus is beer, but they have also released this root beer. They brew their root beer with a "hot mix" process using spring water, herbs, vanilla, and yucca. They also emphasize that they use Louisiana cane sugar, giving their drink a taste reminiscent of "soft drinks made int he 1940's and 1950's." They source their water from a artesian well located near their brewery.

Immediately after opening, a strong but common root beer smell  hits you (think IBC). But common doesn't mean bad - it is actually quite an enjoyable smell. So it is off to a strong start with a nice, familiar aroma.

The taste, however, is not as impressive. There is a strong vanilla flavor, but overall it lacks punch. If I had to give a general assessment I would say it tastes like watered down IBC. Also the carbonation is somewhat flat, making it taste thin. The taste hardly registers when you first drink it, noticeable only after it has filtered down around the tongue. Even then it is thin tasting, but quite sweet. Although I usually like sweeter root beers, the sweetness here just isn't appealing to me. At times it almost tastes like plain soda water on the tip of the tongue, then really sweet in the back taste buds. It has a licorice aftertaste, but not the anise flavor of White Rose. It did get better with time, letting my mouth get used to the sweetness so it could distinguish the various flavors.

This is a middle of the road root beer. Better than brands such a MUG or Barqs, but it doesn't compete well when compared with stronger brews.

Good: A nice smell and it gets better with time.
Bad: Thin tasting and very sweet. The flavor just isn't that strong or interesting.