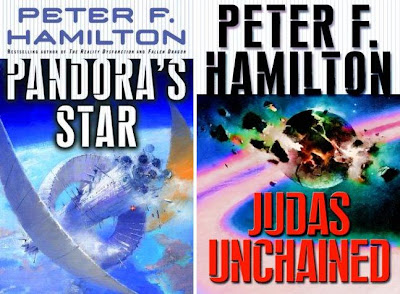 Continuing my science fiction run of late, I recently picked up two books in the Commonwealth Saga by Peter F. Hamilton: Pandora's Star and Judas Unchained. Hamilton is best known for his lengthy space operas with most books approaching 1,000 pages.
In a universe connected by a giant rail-network in the sky, the Commonwealth series is focused around wormhole technology that allows instantaneous travel across great distances. The trains riding these wormholes travel from world to world as if they were subway stops on the local line. Mixing this technology with alien races, regenerative and memory-transfer technology, and the threat of intergalactic annihilation leads to an engaging, but at times slow-moving, story.

Since I am reviewing both books here, I will try to signal anything that gives away too much of the plot of the first book. In Pandora's Star, a purposeful word-play with the tale "Pandora's Box," the astronomer Dudley Bose sees a distant star disappear. It is discovered that the star has been surrounded by a strange enclosure, making the ever-curious humans mount an exploratory expedition. What they find and its ramifications bring the book to its cliff-hanging conclusion.

(Warning: this paragraph reveals the plot of the first book) In Judas Unchained the narrative picks up again with the Commonwealth rushing to recover from the attack of the Prime aliens released from the enclosure. In addition, the Starflyer alien, a religious-like myth that is propagated by fanatics on the world of Far Away, begins to become more real for those investigating strange occurrences in the Commonwealth. How this alien is connected to the Prime invasion and the means by which humanity bands together to fight their impending destruction are the main plot questions driving the second novel.

Hamilton's style of writing weaves characters in and out of the narrative. For instance, at times we can follow a character and story for a hundred pages and then not see her again for 300 more. Another element of this style is a huge cast of characters that can become confusing at times. I found myself flipping back in the book, randomly looking for a name that I could not place with any particular plot line. Another feature of his writing style is that at times the plot slows to a crawl. We find ourselves following mundane trips between planets where little happens but a lengthy description of the flora and fauna that each planet offers. An easy fix to these slowdowns is to skim these parts and pick up again where the main plot resumes. I recommend this tactic because while the descriptions can be interesting at times, they are not spectacular or particularly unique.

A unique feature of this universe that gives grist to the plot is the technological ability for everlasting life. Human bodies can be reversed aged, leaving the option to return to one's 20's whenever he wants. Also, if a death should occur accidentally, memories are stored in secure storage facilities and also in a chip inserted in the brain. A clone is made, memories are inserted, and viola! - resurrection. One interesting result of this ability is the difference between "first-lifers" and those who have been rejuvenated. Hamilton works with the adage that wisdom and stability come with age -- leaving the "first-lifers" as being saddled with unbridled passion and naivety. It is clear, however, that the passions of the first life are looked at with nostalgia by those who have lived more than once.

One of the odder parts of these books is how marriage and sex are portrayed. First, with the invention of everlasting life, marriage is now seen as a temporary arrangement. It is assumed that all marriages will end within a lifetime (two at most) when the partners get bored and move on. There is also a focus on sex's use as a tool to gain power and prestige. While such a use of sex in a book wouldn't strike me as odd, its continual reappearance in endless but repetitive variety made we wonder what was driving the author to do so.

(If you plan on reading the books, you will want to skip the next two paragraphs.) The final aspect that interested me was the religious-like cult that ends up being right in the end. These fanatics blow up buildings, terrorize, and cause much trouble for the Commonwealth. They are the only people in the universe who believe in their cause. They live in the remote mountains on the remotest planet on all the Commonwealth, giving them limited freedom to further their goals and plans. In the end, however, they are portrayed as the saviors of humanity and deserving of gratitude. While I do not believe Hamilton was trying to make any sort of religious or political statement with this group, it was interesting to see the fanatics be right for a change.

The parts of these two books I enjoyed most was when the narrative entered the thought process of MorningLightMountani, the Prime alien threatening humanity. This creative exploration of a thought process and perspective quite alien to humanity was fresh. The contrast between the individuality of humans and singularity of the one mind ruling all Prime life made for an engaging motif. I found those sections as reminders of how much our view of the world is shaped by who we are and where we reside.

I give both of these books a Recommended. They open an interesting world where strange and wonderful things are possible. They are not deep reflections on philosophy or ethics, but they do offer a pleasurable escape for those who enjoy reading about the stars.
at 5/29/2009 10:36:00 AM