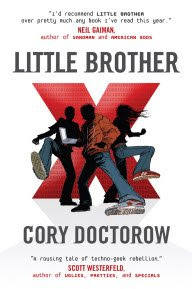 My most recent foray into literature has been Little Brother by Cory Doctorow. It is a book geared toward teenagers yet engaging enough for adults. The title is an allusion to Orwell's famous dystopian 1984 - an allusion made even clearer by the nature of the book.

Set in scarily realistic San Francisco (presumably a few years into the future as shown by the reference of Xbox Universal, a free-for-the-taking console whose purpose is to encourage people to buy games), Little Brother details a 17-year old's struggle against an oppressive Department of Homeland Security (DHS). After the Bay Bridge had been blown up by terrorists, Marcus Yallow and three of his friends are detained for days and eventually released under the threat of further action if they tell their story to the press. The plot progresses from there as Marcus develops ways to undermine the DHS while developing new friendships, breaking old ones, and ruminating on the meaning of freedom and security.

One unique aspect to this book is that it gives a fascinating look into hacker culture. It even has afterwards by famous hackers endorsing the book and its author. While some of its explanations of hacking are simplistic, others, such as its description of cryptography, are insightful to the non-specialist. After reading it one can't help but pay more attention to the monitoring and security all around.

The book also does not shy away from making obvious allusions to contemporary political events. Waterboarding, surreptitious extradition of prisoners, and racial profiling are all made to look evil within the narrative. Airport security, police checkpoints, and the electronic flagging of suspicious people are silly and ineffective means of deterring terrorists. The crusading investigative journalist and the UCLA are heroes in the story. Anyone in authority ("Don't trust anyone over 25!") is seen as cherishing safety over freedom and being complacent and complicit in oppression. Aside from some obvious aggrandizing, the story does make one consider at length the trade off between freedom and safety. The book gives no clear answers (it in fact admits to not having answers) but it weighs in heavily by narratively arguing that we should error on the side of freedom. Whatever one's position on these issues, the book is worth reading for making us, for a long period of time, consider how we would want our government to act in a similar situation. It would be worth reading for that alone.

I do have a few criticisms. The book gets preachy at times (attacks on Foxnews, the war in Iraq, and authority in general). It also lionizes hippies of the 60's and 70's in terms that are too rosy to be realistic. On the Road and the Declaration of Independence are the two most cited works. Also, there are some odd plot movements. Marcus' friends, whom we are introduced to early on, disappear without much explanation. A different girl squeezes in with just as little. There is also a sexual component that makes one feel as if the author has watched a few too many teen dramas. The style is enjoyable but nothing beautiful. Language is used well, not masterfully.

The final question is whether this book should take its desired place as a successor to 1984. In this aspect, "Little" is surely the correct adjective for the title. Orwell creates a world where the government "creates" reality on a whim, controlling minds and wills at its leisure. That government is truly terrifying. Doctorow's oppressive government does seem to be the "little brother" to Orwell's. Orwell allows hope to bloom throughout the book only to be crushed under the weight of the omniscient government. Doctorow, however, allows hope to bloom and reach fruition. 1984 is truly scary; Little Brother is unsettling. While Little Brother loses in both the grandness of the story and its literary quality, it does win in contemporary realism. 1984 loses some power because it seems so removed from current life; Little Brother gains power because it seems possible. Therefore, while Little Brother will not overtake 1984 on lists of great literature, it helpfully modernizes, plausibilzes, and technologizes the danger of oppressive governments.

I give it a "highly recommended" because it narratively forces us into deep engagement with extremely important and relevant issues. At the same time it is a fun read that makes one glad to have learned and enjoyed at the same time.
at 5/07/2009 11:01:00 PM